AATi Rail supplied the SN293/WL/280B on two staircases providing safer access to existing staircases. This nosing gives flexibility with a bevelled back edge reducing the installation cost associated with insetting the nosing into a stair, enabling installation straight onto the existing substrate. AATi worked closely with Client – Network Rail to ensure a high-performance solution was delivered on an extremely high footfall station where stair access can bottleneck.

Network Rail engaged AATi early in the design process and fully understood the benefits of AATi cast metal anti-slip and anti-wear products that are also seen all over the London Underground network. The AATi cast profile exhibits cast-in silicon carbide encapsulated into the top surface, providing superior anti-slip and anti-wear properties than any other product on the market.

A future HS2 terminus, this station is in line to receive additional development including the proposed expansion and canopy over HS2 platforms. Reportedly reducing travel times from Manchester to Birmingham from 86 minutes to 41 and to London from 128 minutes to 68. The new line is expected to complete by 2032. 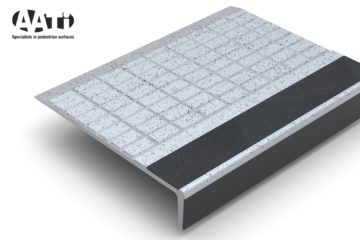